Now available for iOS and Android! Or play in your browser here!

My home in the wild northwest of Alaska is usually so beautiful and snowy! But since NM Energy has moved in with all of their trains, boats, and oil rigs, things have gotten messy. Their smokestacks are spitting out so much dirty soot. That yucky soot makes me cough, and it’s making the snow melt away much faster!

I need your help to catch all of the gross soot particles before they hit the snow. Grab them in the air as quickly as you can. Otherwise the temperatures will rise above the freezing point (0 degrees Celsius or 0 C), and we’ll be all soggy. 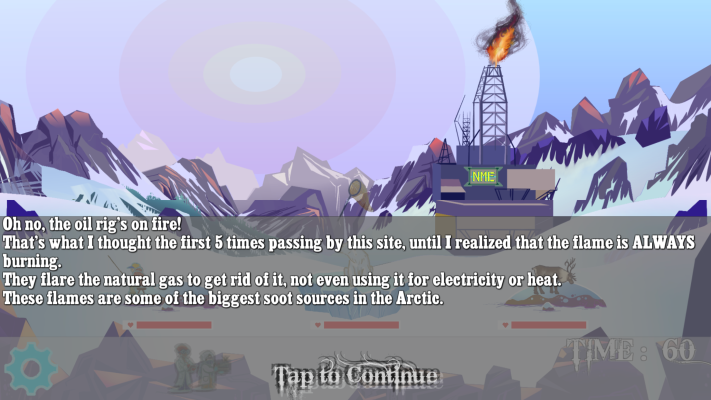 You won’t be alone — you’ll unlock some cool power-ups to help you along the way. The scientists help to catch soot over one of your islands. The special scientific vacuums will clean off the soot from all the areas. The final, secret power-up lets you harness the power of nature — you’ll have to see it to believe it!

After each level, you have a chance to collect soot particles that you can analyze back in the science lab. These let you unlock real scientific facts and images about soot in the Arctic, written by climate scientists!

Soot Out at the 0 C Corral was designed and built by EarthGames, a group of scientists, game designers, and artists at the University of Washington. We’re an award-winning group of students, researchers, and professors that are dedicated to making fun science-based games. Help us get the Soot Out!!